The dogs at Tito’s Handmade Vodka offices and distillery are a constant reminder of the company’s mission to “unite with our friends, fans and partners to better the lives of pets and their families far and wide.” 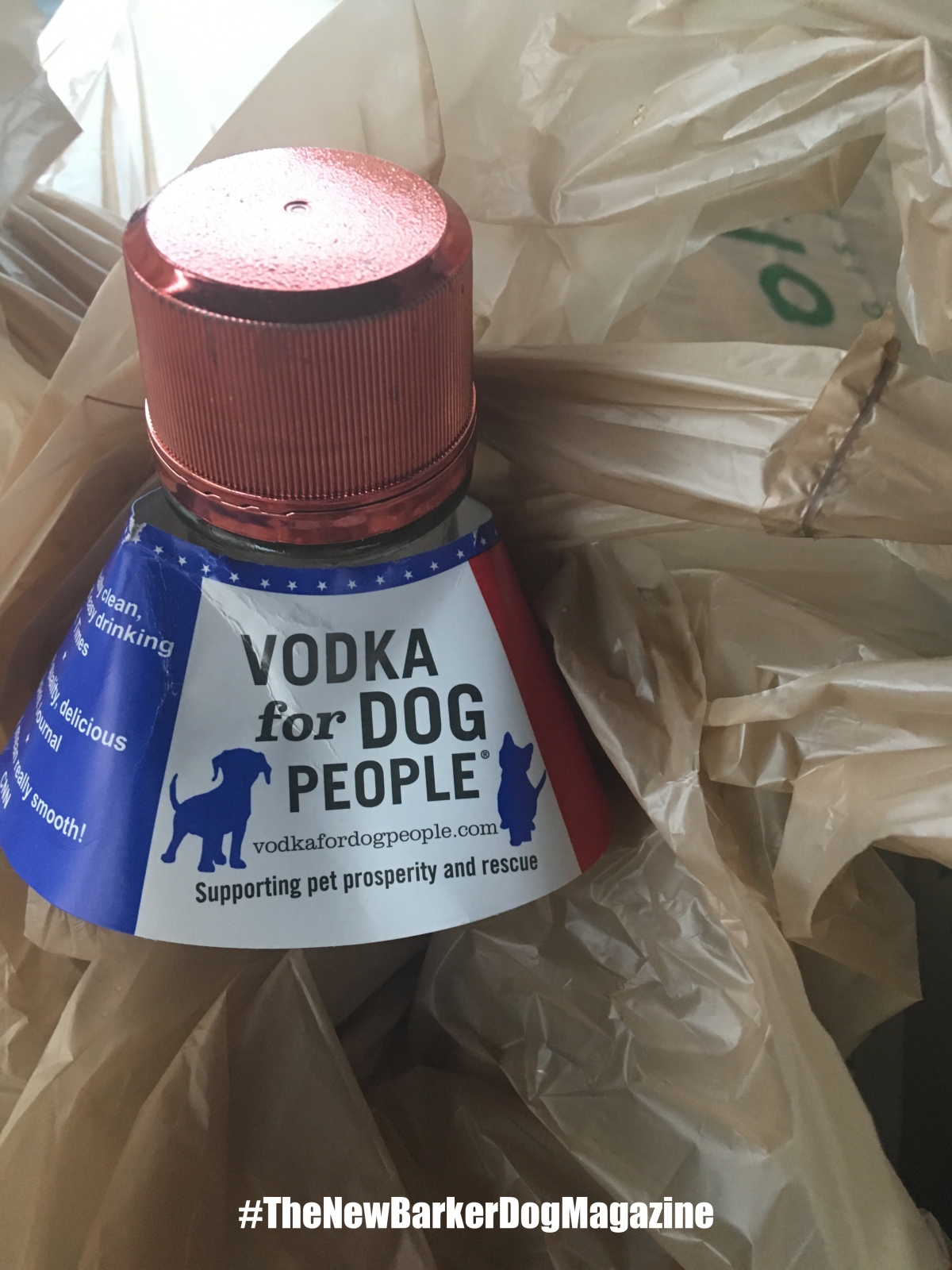 One of the very first employees of Tito’s Handmade Vodka was a dog named Dogjo. She was right by Tito Beveridge’s side when he started his distillery in 1997. It was the first legal distillery in Texas and the only crafts spirits distillery in the country, at the time.

During those early years, Tito’s Handmade Vodka was a one-man operation – from crafting and packaging to selling, delivering and dealing with paperwork. Beveridge and Jo often ate and slept at the warehouse. The 50-pound bags of dog food that Beveridge stored for Jo eventually attracted a revolving door of homeless pups, fondly called “distillery dogs.”

Beveridge has always said that he makes the vodka he likes to drink. “Since I was the guy making it, bottling it and selling it, I realized I couldn’t make something for somebody else. It was just fortunate for me that my palate falls into the bell curve of what vodka drinkers like.”

Tito’s Handmade Vodka grew and so did the number of dogs who hung around the distillery, as Beveridge continued to feed and take care of them. Today, the distillery is home to a handful of rescued dogs, including Taki, the current resident distillery dog who eats, plays and lives there. The dogs are a constant reminder of the company’s mission to “unite with our friends, fans and partners to better the lives of pets and their families far and wide.” Following the devastating destruction that resulted from Hurricane Harvey in 2017, it is no surprise that this dog-loving team came together to brainstorm the most effective and immediate ways to help those affected.

“When a natural disaster strikes, one of the largest groups affected is always stray and abandoned animals,” said Amy Lukken, Chief Joyologist of Tito’s Handmade Vodka. “We knew we would have to act quickly, even before the storm made landfall, in order to save as many animals’ lives as possible,” she added. The Tito’s team has an ongoing relationship with local animal shelter Austin Pets Alive! When they reached out for help, the Tito’s team provided as much support as possible, even as some of their own family members in Houston and surrounding areas would be displaced because of the hurricane.

Tito’s Handmade Vodka animal advocacy program, Vodka For Dog People, donated money to Austin Pets Alive! to help with the purchase of food, supplies and shelter for displaced animals after Hurricane Harvey hit Texas. More than 5,000 animals who were in Harvey’s direct path have been saved. Vodka For Dog People also gave locally to Wags Hope and Healing and Bailing Out Benji. On the people front, the company partnered with the American Red Cross with a dollar-for-dollar match of up.

Although Austin Pets Alive! and other Texas shelters have done a fantastic job at providing aid to these animals, disaster aid is still needed beyond the Texas border. The Tito’s team continues to help fund transportation methods for pets out of the Caribbean and Puerto Rico following Hurricanes Irma and Maria.

Through the Vodka For Dog People (VFDP) initiative, more than 1,000 animal welfare nonprofits in over seven countries have been helped since its inception, six years ago. VFDP, which partners in more than 700 fundraising events each year, has been a permanent company-wide cause program for three years.

In Florida, VFDP has provided support to more than 50 different events and charities, including Vets For Pets Charitable Clinic in Tampa and Pet Pal Animal Shelter in St. Petersburg. “We expect those numbers will continue to grow as our Vodka For Dog People program gains more recognition and visibility, thanks to partners such as The New Barker,” said Beth Bellanti, Vodka For Dog People Program Manager at Tito’s Handmade Vodka. “The easiest way to get involved with Florida animal advocacy programs is by donating to local shelters and charities. We host VFDP events all over Florida,” Beth added. By the way, we saw a beautiful raffle basket of Tito’s Handmade Vodka with fun goodies at Manatee County Animal Services 4th Annual Adopt-A-Palooza  this past Saturday.

Vodka For Dog People is the perfect legacy to honor Jo, Tito’s first companion dog, almost 21 years ago. “Everyone has an incredible rescue story, including those of us who have adopted dogs from the distillery,” said Beveridge.

Reflecting on those earlier days, Tito thinks about failure in terms of energy. Harkening back to his geophysics days (he graduated from The University of Texas with degrees in geology and geophysics in 1984), Beveridge said, “Energy isn’t destroyed. It simply changes forms.” He uses this knowledge to his advantage whenever he is struggling with a project. “Your first instinct is to blame everyone else,” said Beveridge. “But, don’t blame it on anyone. Wrap your arms around [the failure] and take the blame, so all the energy becomes yours. You can’t destroy energy. You can, however, change the phase.”

We’ll toast to that.

The New Barker is a Florida-based lifestyle magazine all about dogs and the humans who love them. Featuring original stories with award-winning photography in each quarterly publication since 2006 – each cover of The New Barker features an original work of art by a different artist. Subscribe today.

Who knew that drinking vodka would be for the greater good of dogs? Not just any vodka, though.

Earlier this year, THE NEW BARKER partnered with Tito’s Handmade Vodka to create a social media contest for adopted dogs. The contest post reached more than 15,000 people on THE NEW BARKER Facebook page. The top three dogs with the most votes received the honor of having a cocktail created in their name, using Tito’s Handmade Vodka, of course. In no particular order, the winners are (below, left to right) Taj from Boca Raton (photograph by Tina VaLant); Reggie from Tampa and Aggie from St. Petersburg.

We will share the refreshing drink recipes and more about these dogs in an upcoming blog. For now, a bit about the man behind the Vodka For Dog People.

Twenty years ago, in Austin, a geologist-turned-mortgage-man began a hobby with his trusted white German Shepherd mix, Jo, by his side. Tito Beveridge (his real name) began distilling vodka using hand-crafted stills he made himself. “Jo was the only contact I’d have with another life form in days,” said Tito, as he cooked batches of the product, then bottled and loaded it for distribution. During those early days, Beveridge often slept on a cot he’d set up inside the warehouse, his companion Jo curled up nearby. “She was with me the whole time. I still can’t talk about her without tearing up,” he says.

In 2001, Tito’s Handmade Vodka won the Double Gold Medal for vodka at the San Francisco World Spirits Competition, beating out 71 other vodkas. Even The Dude (aka Jeff Bridges) in the movie The Big Lebowski recommends Tito’s as the best vodka with which to make a White Russian. Tito has done something even more extraordinary than creating his handmade vodka. He launched VodkaForDogPeople.com to help save homeless dogs after noticing the many stray dogs wandering onto his distillery’s property. The distillery is located just outside Austin city limits, where feral dog packs had been a growing problem. Tito’s employees began to adopt or foster them. Today, employees’ dogs can be seen lounging around the marketing office, while the distillery has many dogs who live on the property full-time.

The distillery became an unofficial dog adoption center. Strays would come onto the property, where they were cared for and made available for adoption. Tito’s staff took many of the stray dogs to Emancipet, an Austin-based organization devoted to making spay/neuter and preventative veterinary care affordable and accessible to all pet owners. Once the animals received treatment, Tito began talking to people in the community about adopting the dogs. He has since found homes for more than 60 dogs through the distillery.

Tito’s, the brand, has officially partnered with Emancipet to reach communities outside of Austin, like Hillsborough County’s Vets 4 Pets Charitable Clinic in Tampa. You could say that, using Tito’s Handmade Vodka in your mixed drinks is the right thing to do. Ethical inebriation, as blogger Claire Cudahy calls it. Today, Vodka For Dog People sells leashes, collars, dog bowls, and clothing. All of the profits from the sales go directly to Emancipet.

“Google ‘Successful Failures’ and you’ll find that everybody that you think is a great success in the world has gone through multiple failures.” –Tito Beveridge

Jo, the German Shepherd mix who helped Tito start it all, is buried on the distillery’s property. Few expected Tito to succeed when he first began making his vodka. His successes and subsequent partnerships with Emancipet and other animal-rights organizations have become a way for him to support a community that helped him when he was a struggling entrepreneur. He may just see a bit of himself in the dogs he’s helped along the way. “My loyalty to those who believed in me shows in the consistency of those partnerships 20 years later. I believe you should dance with the one who brought you.”

The New Barker dog magazine is honored to be a partner with Tito’s Handmade Vodka and help spread their #VodkaForDogPeople story (short video below).