In an instant, the shark’s head came out of the water and snatched Jake’s entire body. Greg could hear Jake’s scream as the breath was being squished out of him. Suddenly, the shark and Jake were gone. Greg knew he had to go in after his dog. 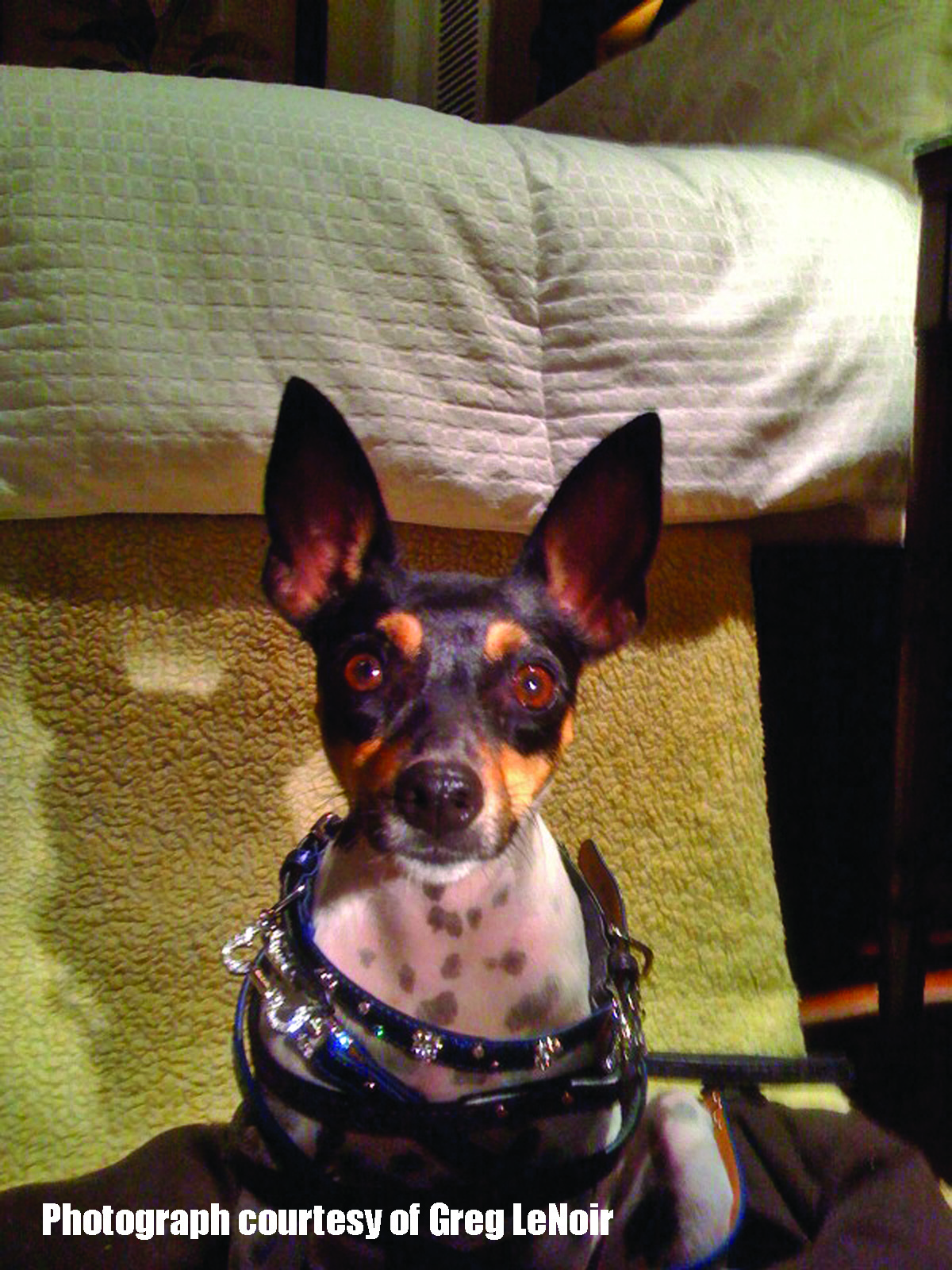 by Anna Cooke. The article was published in The New Barker Dog Magazine, Spring 2009.

Greg LeNoir is a finishing contractor in Islamorada in the Florida Keys. His truck is his office and his dog, Jake, is his constant traveling companion.

“I do trim work, and all of my tools are in my trailer. When I am working, Jake sits in the trailer and guards it. He has an intense look on his face and people mistake that look for him being a mean dog. So they stay away from the truck,” chuckled Greg. “He sits on that trailer like a tiger guarding his den.”

Greg adopted Jake, a 14 pound Rat Terrier, from a pet rescue in the Keys when the dog was about 15 months old. Jake is three now, and if he were a cat, one might figure he has eight of his nine lives left to live.

“At lunchtime, Jake is always ready to eat. We’ll go down to the marina and I’ll take out my bag lunch. Jake runs straight for the water and dives in for fish,” Greg explained.

September 30, 2008 was like any other day. Greg was taking a walk along the mangroves at the marina, near his home. As usual, Jake was in the water, jumping and diving after fish. Jake is a strong little guy, and sometimes he’ll find a piece of driftwood, bigger than he is, and drag it out of the water. When he swims around, Jake never splashes. He just glides silently through the water.

“As I walked parallel to Jake, I watched him swim,” said Greg. But when Jake headed towards the pier, Greg saw the shadow of a shark following close behind.

“I hoped it would not notice Jake, and just swim away,” said Greg. “Then I noticed the jaws of the shark begin to change.”

In an instant, the shark’s head came out of the water and snatched Jake’s entire body. Greg could hear Jake’s scream as the breath was being squished out of him. Suddenly, the shark and Jake were gone.

“I looked around to see if there was anyone who could help me or if there was something I could use.” Greg and his wife Tessalee have no children. Jake is like a child to them. When he saw the shark disappear with Jake, he thought. “This cannot be the end.” He knew he had to go in after Jake.

Greg visually calculated where the shark would be underwater on the other side of the pier, and dove in. With his fists together like a battering ram, Greg thought if he hit the shark hard enough, he wouldn’t be interested in Jake and maybe let go of the dog. The water was murky and full of Jake’s blood by now. Greg managed to ram his fists onto something solid. “I thought I hit a piling. Then I realized it was the shark and I saw Jake. We all fell down to the bottom. Silt and blood were everywhere.”

When Greg surfaced and looked around, he saw no sign of Jake or the shark. He wanted to go back down. Then, Jake popped up alone and screamed, no longer gracefully swimming but frantically splashing straight for the shore, fighting for his life.

Once Greg saw Jake, he too began furiously swimming for shore, knowing the shark was still out there, somewhere. “I could sense the shark’s presence and I just knew, until the tips of my feet were completely out of the water, that shark was going to get me,” said Greg.  “I had nightmares for weeks afterwards.”

By now, tourists had gathered along the shoreline, their mouths gaping wide in horror at what they had just witnessed. Greg reached down to comfort Jake, who began snapping back at him in pain. “It was a pitiful scene,” said Greg. He bent over the dog, telling him how sorry he was, and gently wrapped Jake up in a towel to carry him home.

As the two of them arrived home, they were still covered in Jake’s blood. Tess recalled it looked like a scene straight out of a Stephen King novel. They rushed Jake to the Upper Keys Veterinary Hospital, who had been alerted by Tess that they were on the way, and what had happened. A team was waiting for them when they arrived.

“Not a second was wasted,” said Greg. “They were so efficient. It was amazing.”

Veterinarian Suzanne Sigel and emergency on-call assistant Callie Cottrell attended to Jake’s wounds, which included punctures to his skin and some muscle along the abdomen, chest and back. Greg recalled that the bite marks were in the shape of an upside down smile. Jake also suffered lacerations on his right side and front left leg, his skin hanging like ribbons.

“Amazingly, Jake wasn’t critical,” said Dr. Sigel. Her main concern was that the dog may have inhaled saltwater when being pulled under, but there was no evidence of infection or pneumonia.

Later, after examining his wounds, it was clear where the estimated five-foot shark’s original grip was with most of the damage around Jake’s belly. It was also clear that Greg’s punch had caused the shark to loosen his grip and then clamp back down on Jake. There was also evidence that Jake had fought back and bit the shark underwater.

Jake has fully recovered and is fearless once again, although he suffered some flashbacks, including during a visit to a local sporting goods store. “Jake happened by the fish tanks and stopped to stare. Then he began shaking and crying,” said Greg.

“Jake is such a worthy little soul,” said Greg. “I have an extra soft spot in my heart for him now for my misjudgment. I owe him for the rest of his life.”