We have been creating The New Barker dog magazine for 10 years. It’s been an amazing journey.

To All The Dogs We’ve Loved & Lost. And Those We’ve Never Met. A Journey Of Hope, Happiness, Heartbreak & Healing.

The 10-year anniversary edition of The New Barker is in distribution and being mailed to subscribers. It is hard to believe that ten years ago, December 2006, we produced the first edition of the print magazine during a time when 155 new magazine titles were created; a time when the demise of print was being predicted.

While the decline of print continues to be argued (ironically in newspapers and business publications), a total of 862 new magazines were launched in 2013 “with a courageous repudiation to their critics,” said Samir Husni, Ph.D., also known as Mr. Magazine. Husni featured The New Barker in one of his 2016 weekly interviews.

“There is a tangible connection between myself and magazines. I don’t choose them, they choose me, so the living and breathing passion that I have felt for magazines over the last 30 years has instilled within me an innate ability to meld with ink on paper,” said Husni. He looks for a magazine’s ability to engage an audience through photography, undeniable style and noteworthy content. As the director of the Magazine Innovation Center at the University of Mississippi, School of Journalism, he is widely considered to be the country’s expert on magazines.

Our editorial philosophy, here at The New Barker has always been to focus on feel-good lifestyle stories about people and their dogs. Unfortunately, one of the first harsh realities we faced while developing feature stories was discovering the number of shelters in Florida. The open intakes (many of which are high kill shelters), the limited intakes, the privately-run and/or county-run shelters. Look further, and there is a huge contingent of breed-specific rescue groups, SPCA and Humane Society organizations that are all independently-operated. There is no connection, other than name association, between the national organizations and the local shelters in our communities.

Someone once told me that a new shelter could open down the street from another, and within a week, it would also be full of abandoned, unwanted dogs and cats. Why? Why do more shelters keep opening and filling up? Why are so many adoptable dogs and cats euthanized? Where are the people who supposedly want to adopt them? With all of this presented before us, some people actually believe that the pet overpopulation problem is a myth, taking the No Kill movement’s information out of context. Pose any of these questions to a shelter employee and you’re likely to receive a cold shoulder. It’s a tough business, running a shelter, and understandably, some become defensive. Yet, the public shouldn’t be bullied into not asking important questions.

There are plenty of opinions on how to fix the problem, some extreme. While we’re arguing which solution is right, 10,000 healthy, adoptable dogs, puppies, cats and kittens are euthanized every day in this country. Extreme solutions or not, no matter how we get there, we all want the same things: to stop the needless killing of adoptable dogs and cats — and increase the number of adoptions.

Over the last 10 years, The New Barker has donated close to $200,000 in money, in-kind advertising, goods and services to Florida shelters, rescue groups and animal advocacy programs. This, and the magazine’s very existence, are made possible because of three very important elements: First, and foremost, our advertising partners. The New Barker is 100 percent advertiser-supported. Second, our wonderful team of independent photographers, graphic designers, and rover reporters who have been with us almost since our first year. And last, but certainly not least — you, our gentle readers. We love hearing from you — your opinions, your story ideas, your passion. Thank you to each and everyone of you, without whom this would not be possible. It has been an incredible journey.

The photo on the left, taken by professional photographer Laura Allen in 2006, was for the very first issue’s Editor Unleashed column. It ran for several years until we adopted Dougie, the Scottish Terrier, from Dunedin Dog Rescue. Laura, again, took the photo. We set up at Honeymoon Island in Dunedin. In the past year, we have lost Zoe (the blond Cockapoo) and Chloe (the black and tan Cockapoo). They each lived with us for 18 years. 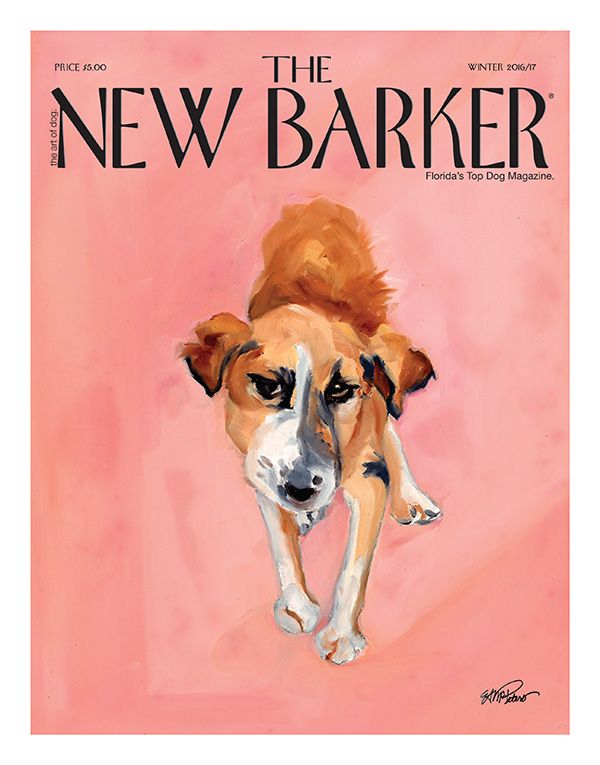 10-year Anniversary edition of The New Barker dog magazine. Cover title: The Dog in Pink, by Myakka City artist Evelyn McCorristin Peters. Every cover of The New Barker has featured an original work of art by a different artist.