We first met Jolene, a beautiful white Standard Poodle, in Tampa at Woofstock, hosted by TampaPets.org. Her fur had been accented in pink to show her support for Breast Cancer Awareness. The following is an original feature from the winter 2015/16 (current) issue of The New Barker dog magazine, written by Anna Cooke.

At fifty years old, Barbara Mahoney decided to end her abusive marriage and sell her business. She knew the change would be good for her, but realized she was still not in a good place, emotionally. She recalled how happy she felt around her mother’s dogs while growing up, especially the Poodles. Now, she wanted a constant companion, someone who would give her unconditional love. A dog who would go swimming with her. Heck, maybe she’d even get into agility, she thought. Jolene came into Barbara’s life in 2011, and she decided to let the dog show her just what she wanted to do in the way of “work.” When she was just a year old, Jolene began her athletic career in dock diving. She received her canine therapy certification in water rehabilitation. She took the Southeastern Regional Division championship in her class, and all was good. Then, someone threw a Frisbee. Jolene ran after it, and caught it. She and Barbara were hooked. Barbara sought out competitions and talked to other people about Jolene’s talent. “I even found people to throw Jolene the disc when I broke my clavicle,” she said. “I didn’t want her to stop having fun while I was laid up.” The duo’s devotion to the sport and hard work quickly paid off. Jolene became the only World Qualifying Standard Poodle in the sport.

“Working with dogs in activities like disc and agility enriches and completes our relationship with them,” Barbara told us. “Jolene is an exceptional Poodle, but she is also an incredible disc dog.”

Barbara and five other people formed Up Dog Challenge, an organization they hope will inform dog lovers how “awesome this sport is,” she told us. The group’s goal is to provide a non-intimidating forum where people will feel comfortable asking questions about the sport. Go to an Up Dog Challenge event and everyone involved is approachable and enthusiastic about the sport. “We want more people to know how fun this is,” added Barbara. “All ages and skill levels are welcome. All breed types, size, and shape. We’ll even teach you how to throw a disc so that your dog will catch it. We have trainers that are very good with newcomers to the sport. They explain how your dog thinks and will train you to throw the disc in a way that maximizes your dog’s success. We want to optimize that play for you both.”

Dogs are happiest when they have something to do, when people play with them. “Happy dogs equal happy people,” said Barbara. “Look what Jolene did for me. She changed my life.”

This story originally appeared in the current issue of The New Barker dog magazine. 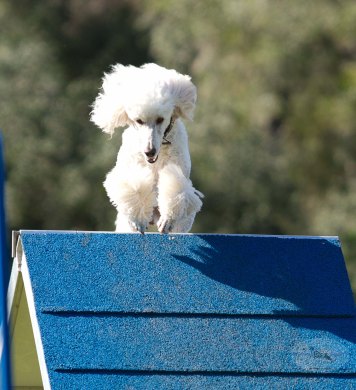