By now, many of you have noticed: We didn’t have much of a Winter here in Florida. And, as a Floridian who truly loves tropical weather, I am certainly not complaining. But an unseasonably warm Winter in Florida does present other problems, mainly a proliferation of bugs. So, as we prepare to put out the Spring issue of The New Barker, we are gearing up to tackle fleas, ticks and other critters that will just plain bug us and our companion pets if we are not prepared. In our Dog HomeFront section, we’ll have tips and ‘todes on dog friendly landscaping.

The Spring issue of The New Barker will feature some amazing dogs at play and at work. And, thanks to our contributing rover reporters from all over the state, we’re featuring dog friendly events and stories from the Panhandle to the Palm Coast, Miami and the Florida Keys, Dunedin to DeLand.  Our dog social calendar was pretty full this first quarter of 2012. And the next few months are shaping up to be ultra busy with dog events across the state. While we print a three month calendar in each issue, our online calendar is updated at least once a  week. Be sure to sign up for Weekend PupDates, The New Barker email blast that goes out about two times a month, letting you know about the hottest dog friendly events, and venues in Florida.

The Spring issue will also feature opportunities to win dog friendly getaways, some pretty impressive gift items, and gift certificates at some of Florida’s favorite places to dine. As a lifestyle magazine, we will be featuring unique perspectives on the AKC Eukanuba National Championships, the Florida Classic Clusters in Brooksville, and of course our annual trek to New York City for the Westminster Kennel Club Dog Show. Oh, and find out how your dog could become our bikini-clad, pull out centerfold in the Summer issue.

One of our favorite feature pieces in the Spring issue involves Manatee County Animal Services, and their promise to be a No Kill community by the end of 2012. Thanks to their county commissioners, the public and folks like Chris Weiskopf, they are well on their way. Some other towns in Florida are working on following suit with Manatee County, while others are taking a wait-and-see attitude. Meanwhile, dogs continue to die in shelters across the state, despite the number of rescue groups willing to step up and help out. And while you might expect many of the deaths to be Pit Bull-related, count Yorkies, Dachshunds, Chihuahuas, Dalmatians and Boxers among the statistics. In this issue we welcome a contributing original feature from Nathan Winograd.

Thanks to the  Humane Society of Manatee County and Realize Bradenton, we are bringing the creative team behind An Act of Dog to Florida. Meet Mark Barone and his partner Marina Dervan, and come see some of the poignant work Mark is painting. He has committed the next two years of his life to painting the portraits of 5500 dogs euthanized in shelters across the country. Why 5500? That is the average number of dogs euthanized – every single day in this country. The couple will be in Bradenton during The New Barker co-hosted The Artful Purpose Art Show, March 24. 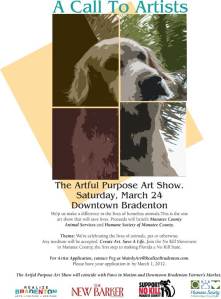 The show coincides with the Annual Paws in Motion walk on the riverfront for the Humane Society of Manatee County. And, both events take place in the same vicinity and general timeframe (8a-2p) as Downtown Bradenton’s Saturday Morning Farmer’s Market.

One last piece of business before I sign off and jump back on production. Since July of 2011, I have had the extreme pleasure of being part of a radio program produced by CMA award-winning radio personality, Skip Mahaffey. While I still get flummoxed and tongue-tied (thank goodness for Skip’s uncanny ability to recognize my deer-in-the-headlights look) we are having a lot of fun. Our live interviews have included Elvin Bishop, Nathan Winograd, Guy Gilchrist, Dr. Marty Becker, Victoria Stilwell and Aaron Tippin to name but just a few. Recently, we had a young man who was inspired by his Jack Russell to help raise money and awareness for Canine Cancer. When Spiro Cromwell’s dog, Jack was diagnosed with cancer, he was sad, but wanted to do something for all of the other dogs living with cancer. He became involved with the National Canine Cancer Foundation, and has raised a little more than $2,000 over the last two years.

Spiro, his mother Emerald and their new puppy Murphy visited with us in the studio for a live interview. At one point, we lost contact with the production booth and with Skip who was on Skype. Our producer came into the booth trying to figure out why our computers were not receiving a connection. Turns out, Murphy, the puppy that he is, chewed through the wires. Live radio – you just never know what’s going to happen next.

Tune in to The SkipShow this Monday, March 19 between 1p and 2p EST as we interview Mark Barone and Marina Dervan with An Act of Dog. We’ll also have a volunteer from Golden Retriever Rescue of Mid-Florida and most likely a few guest surprises as well. We always feature songs that are dog-themed in content like Man of the Hour by Nora Jones,  and Like My Dog by Billy Currington. Enjoy.

It was a veritable who’s who of Tampa Bay dignitaries and dog lovers at the Westshore Marriott on Saturday, February 4. More than 250 folks attended the Save 90 Conference, featuring Nathan Winograd. The New Barker, a proponent of the No Kill Movement, and one of the sponsors of the event, first featured a review of Nathan’s book, Redemption, in 2008. It was the book that started the No Kill Movement. Meeting the (in my humble opinion) rock star who is Nathan Winograd was indeed a pleasure, and an honor.

He was in town at the invitation of Linda Hamilton and Frank Hamilton, both with Animal Coalition of Tampa, a low cost spay/neuter clinic in Tampa. Pacing the floor before the conference, getting in the zone, it was clear Nathan was on a mission. You see, Hillsborough County Animal Services is searching for a new director, and the Hamiltons are hopeful that the timing of Winograd’s visit will effect the selection process to the degree that no-kill advocacy is a requisite qualification for the job.

Animal Coalition of Tampa set the playing field: The game plan is Save 90 and their star player would be Nathan Winograd. On Saturday, February 4, it was Nathan’s job to get a solid foothold in the game, landing Save 90 on at least first base. Tough, since it’s safe to say some in the crowd were skeptical. But Nathan has seen his share of naysayers throughout his career. Indeed those past naysayers would be part of his presentation, complete with audio sound bites. Tampa Bay was ready to hear Nathan Winograd.

Linda Hamilton opened the conference with remarks that were both humorous and compelling. Then, via a taped video, Kris Weiskopf, chief of Manatee County Animal Services gave an eye-opening review of their mission and promise to be a No Kill Community by the end of 2012. Kris introduced Nathan, who held the audience’s attention for the next two-and-a-half hours. Did I say held our attention? The man not only held it, he lassoed it; reeling us in, making us laugh, cry, and then had us thinking long and hard about taking chances. Chances that will make a difference to the bottom line. The bottom line of saving money and most important, saving lives. What’s not to like about that?

After The New Barker reviewed Nathan’s book, Redemption in 2008, he contacted me and asked if I would like to send autographed copies of his book to shelter directors in Florida. I gave him the name of several shelter directors, and he made sure they knew the autographed books were sent on behalf of The New Barker. Not one shelter director acknowledged receipt of the book. Although, one director did let me know, indirectly via the shelter’s communications director that the book was not well thought of, and would not be read. Almost four years later, all but one of those directors was in the audience on Saturday, February 4 for the conference.

Why the change of heart, Cynthia Smoot of Fox-13 News asked me? My answer: The No Kill Movement is a movement whose time has come to Florida. Manatee County Animal Services made the pledge with full support from the County Commissioners. Other Florida counties are contacting Manatee County, wanting to learn how they too can become a No Kill Community. Linda Hamilton has made trips to Manatee County to meet with Kris Weiskopf and his staff. It’s a movement that can no longer be ignored, or ridiculed. The No Kill Movement has reached the masses, and the people are responding.

Not everyone applauded Nathan on Saturday, nor did every person stand during several standing ovations. But, his words, statistics, and photographs provided substantial proof that the No Kill Equation works. The majority of the audience was convinced that Hillsborough County should become a No Kill Community. His words did not fall on deaf ears. When Nathan was finished, Rick Reidy, Hillsborough County Commissioner Ken Hagan’s legislative aide, stood up to address the audience on Hagan’s behalf. Reidy told the audience that Hagan would recommend to the Board of County Commissioners that Hillsborough County Animal Services take the necessary steps to become a no kill facility.

Nathan listened to Reidy and watched the crowd as they jumped to another standing ovation. A smile was barely visible on this thoughtful man’s face. Yes, we’re in the game because of Animal Coalition of Tampa and Manatee County Animal Services. And, yes Nathan Winograd got us on base. But we’re not in the home stretch yet.

The community must get behind this, and let the county commissioners know how important the issue of No Kill is to them. Join the Alliance to Save 90 by going to www.save90.org. Attend the monthly meetings, held the first Tuesday of each month; the first one on February 7 at the Tampa Tribune Auditorium. Make sure elected officials embrace the decision by the community that the killing of companion animals housed in shelters and animal services, is not okay. Make sure elected officials hire a compassionate and competent individual at Hillsborough County Animal Services to lead the plan. The new hire must be able to embrace the No Kill Equation.